As the VLCC market goes from strength to strength, we’re exploring some of the factors that are driving this trend.

Oil demand across the world remains robust and is closing in on pre-Covid levels. At the same time, production levels are improving, and while OPEC and its allies have recently announced a small reduction in their quotas, alternative producers are posting record high production and exports that are resulting in fairly balanced oil markets. Brazil is one of those producers.

Firstly, on the demand side, a fresh round of product export quotas has recently been released by the Chinese government. This, combined with fewer Covid-related restrictions, has sent the country’s demand for crude surging. Refineries are taking in more crude to utilise the new export quotas and VLCC shipments into China have increased as a result.

The strong recovery in VLCC rates towards the Far East in the past month is driven both by this increase in Chinese demand but also by where in the world China is sourcing its crude supplies. Oil price spreads have supported the buying of Atlantic Basin crudes over Middle Eastern crudes, and we have seen a significant increase in West to East movements in the VLCC segment over the past couple of months. Many analysts talk about the US Gulf and how the release of Strategic Reserve barrels has driven the VLCC market, and this is not untrue. However, in addition to this, we have seen a great support from Brazil. 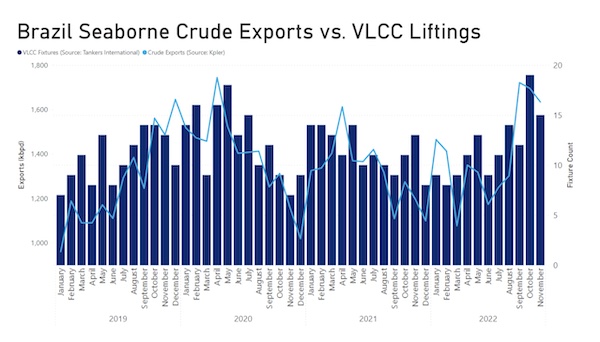 Crude exports from Brazil have risen to new highs amid the strong flows to China, and China remains the biggest buyer of Brazilian seaborne crude. During the months of September and October, data from Kpler indicates that oil tankers loaded 1.7 million barrels per day of crude in Brazil – an increase of 23% compared to the average exports during the first eight months of 2022. Flows to China comprise about 30% of the barrels exported via ship.

Translating this development into VLCC demand presents an equally impressive increase. In October, our Tankers International proprietary data counted a record 19 VLCCs loading in Brazil. This is a huge jump from a monthly tally of 10 VLCC loadings from January to August. With two thirds of these VLCC shipments destined for China, this drives a drastic increase in tonne mile demand for the segment. An average round voyage from Brazil to China takes 100 days to perform, employing a VLCC for significantly longer than the same cargo from the Middle East to China, which takes around 60 days on a round voyage basis (from load to discharge and back to the load region.) So far in November, we count 15 VLCCs booked to load crude in Brazil and the month has only just started.

As oil supplies are tightening in other parts of the world, this increase in Brazilian output and exports is a key driver of the currently buoyant VLCC market.
Source: Tankers International