Carriers pivot on the fly as Asia-US spot rates plummet

Ocean carriers on the Asia to West Coast trade are fast approaching the point where they will lose money on every container they haul as plummeting spot rates sink near pre-pandemic levels and bump up against a new break-even level driven by falling volumes and today’s much higher operating costs.

Spot rates from Asia to the West Coast have fallen rapidly over the past month and are expected to approach the pre-pandemic level of $2,000 per FEU soon, according to forwarders. Industry sources are speculating that if rates drop below that benchmark, shipping lines will begin to lose money because their costs today are much higher than they were in 2019.

Bookings at major mainland China load ports have been dropping since July, reflecting softening demand, according to logistics software provider E2open. The number of weekly orders in the second week of September was down 36 percent from 10 weeks ago, at 12,500, it said.

If bookings continue to fall off and spot rates deteriorate further, industry sources say carriers may soon have to make a shipment-by-shipment decision as to which containers to accept at Asian load ports and which ones to reject because the prices they will be getting could be noncompensatory. 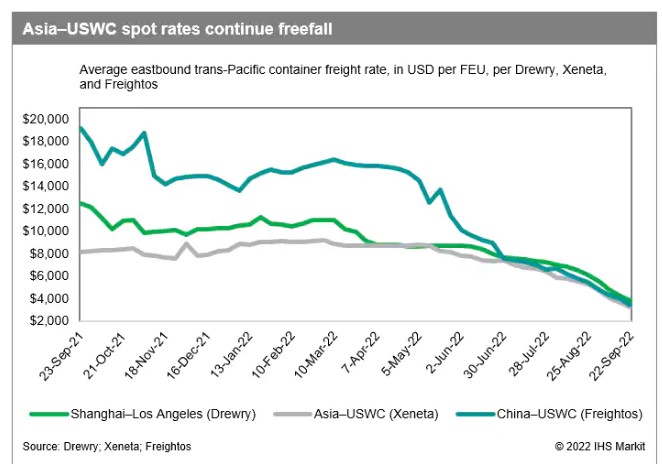 In 2019 and earlier, carriers generally considered the break-even freight rate from North Asia to the West Coast to be about $1,600 per FEU. However, carriers’ costs have risen sharply since then, including bunker fuel, wages, container lift-on/lift-off charges at the ports, and vessel chartering costs, all of which have been affected by inflationary pressures.

Non-vessel-operating common carriers (NVOs) say the rate indices lag by at least a week behind the actual rates their customers are securing in today’s volatile environment in the trans-Pacific, with rates moving lower almost by the day.

Jon Monroe, who represents NVOs, said his clients are booking shipments between $2,100 and $2,200 per FEU, and the rate of decline is accelerating. “Just in September, the West Coast rate dropped $1,456 from August,” he told JOC.com.

Another NVO who did not want to be identified said Thursday he is seeing “sub-$2,000 rates.”

Those anecdotal accounts of actual spot rates in the market are lower than what the official rate indices are listing in their weekly reports. Those rates vary depending on what factors each index includes in calculating its average rate for the week.

On Thursday, the Drewry World Container Index listed the Shanghai-Los Angeles spot rate at $3,283 per FEU, down 13 percent from last week.

Freightos on Wednesday listed the Asia-West Coast rate at $2,978 per FEU. Freightos said the West Coast rate had fallen 45 percent to that point in September to below $3,000 per FEU for the first time since August 2020.

Costs vary by carrier
Although carriers and industry analysts say carriers’ costs to operate vessels have risen hundreds of dollars per container, they also say it is difficult to quote a single number for all carriers because the cost factors vary widely among individual liners. The alliance carriers in the trans-Pacific operate vessels of about 12,000-TEU capacity, which have much lower per-unit carrying costs than the smaller lines that entered the trade the past 18 months with vessels of about 3,000-TEU capacity.

Smaller lines often charter their vessels, and chartering costs have increased sharply over the past 18 months. Unlike freight rates, which customers can and are negotiating lower in today’s volatile environment in the trans-Pacific, charter rates are normally not negotiable, so if a vessel operator agreed to a costly two- or three-year charter, it is stuck with that rate, a shipping executive who did not want to be identified told JOC.com.

Industry consultant Lars Jensen, CEO and partner at Vespucci Maritime and a JOC analyst, said the current environment in the trans-Pacific is much more diverse in terms of operational costs for carriers than it was pre-pandemic. “As a consequence, you will see an environment where some carriers will come under very severe pressure long before others,” he said.

Alliance carriers intend to ride out the storm
Some industry analysts say the carriers in the three alliances may choose to ride out the weakening current conditions and wait for the smaller lines to be priced out of the trans-Pacific, as they did under similar circumstances in 2010.

Industry consultant Larry Burns, who formerly served as senior vice president of sales and management at HMM, noted that a handful of niche carriers opened North American offices and entered the trans-Pacific after the 2009 recession ended, and “within a year they were gone.”

One theory today is the larger alliance carriers are thinking, “If I drop my rate to $2,000, I will drive the little guys out,” said Burns.

The alliance carriers also know that beginning on Jan. 1, 2023, the IMO’s stricter regulations on carbon emissions will take effect, which will drive older, higher-polluting vessels to the scrap yards.

Alliance carriers anticipate that the combination of declining freight volumes, rapidly falling spot rates, increased operational costs, and stricter environmental regulations will reduce capacity in the trade lane over the next four or five months. They are counting on freight rates beginning to rise just in time for service contract negotiations next spring for 2023-24 contracts.

Carriers implementing survival strategies
Carriers have a variety of strategies for making it through the rest of the year and the first quarter of 2023. Most carriers will blank certain voyages, including in early October when factories in mainland China close for Golden Week, said a second carrier executive who did not want to be identified.

It is likely that some lines will suspend entire services, the source added. Mediterranean Shipping Co. announced this week it will suspend the Sequoia service from mainland China to Long Beach beginning Oct. 18 and merge it into its Jaguar service.

Maersk intends to reduce costs by operating vessels at slower speeds. “Our ships have been going all out on speed in order to catch up as many delays as possible,” CEO Soren Skou told Reuters Thursday. “But as things normalize, we should expect ships to come down to normal cruise speeds. This is really important for our fuel efficiency.”

Vessels calling at West Coast ports are leaving Asia at 70 to 80 percent of capacity, down from more than 90 percent earlier in the year, so carriers are being flexible on rates. Some are allowing customers to book shipments at the spot rate in effect on a particular trade lane and are counting those bookings toward the minimum quantity commitments in the service contracts they signed last spring.

Carriers are also offering short-term contracts with rates that are higher than the rapidly declining spot rates, but still much lower than the customers’ service contract rates. The logistics manager at a mid-size retailer said he is signing three-month contracts at rates that are lower than his contract rates but may be higher than existing spot rates. “We’re just pushing to get to the end of the year,” he said.

Burns said that with utilization factors of 80 percent or lower, some carriers are negotiating lower, but not fire-sale rates for about 80 percent of their bookings and are open to taking whatever the lowest rate in the trade lane is at the moment for any cargo above that.
Source: IHS Markit by Bill Mongelluzzo, https://www.spglobal.com/marketintelligence/en/mi/research-analysis/carriers-pivot-on-the-fly-as-asiaus-spot-rates-plummet.html?