The Chinese New Year celebrations, currently underway, meant more orders were contracted during the previous days. In its latest weekly report, Allied Shipbroking said that “the final week just before the Chinese New Year celebrations go into full swing seemed to have been a good one for shipbuilders, with reports of over 20 vessels being added to the orderbook. With the year of the water rabbit set to bring peace and prosperity, owners are seeking to realize it via new gas carriers – an additional seven have reportedly been ordered at South Korean yards by Greek owners. Evalend has announced that it has seven LPG vessels on order, with a capacity of 88,000 cbm each. As previously noted, last year saw a significant increase in car carriers, and SAIC Anji Logistics, a subsidiary of the largest carmaker in China, has placed orders for seven 8,900 (CEU) capacity vessels across two Chinese shipbuilders. Given that China has experienced very strong growth in car exports over recent years and there is a general expectation that this will continue, it makes sense that some of the larger players are seeking to better control their export costs”.

In a similar note, shipbroker Banchero Costa added that “in the tanker market it was a busy week, TMS Tankers agreed to build 3 x LR2 at Cosco Yangzhou priced at $59mln per vessel, deliveries during 2025. Dalian Shipbuilding received an order for 2 + 1 LR2 by Seatankers Management.

The first vessel will be delivered around March 2025, prices reported $59.5mln each. Golden Energy Management agreed with DH Shipbuilding to build 1 + 1 Suezmax with delivery during end 2025, price reported around $77mln. Grimaldi confirmed 5 + 2 optional 9,000 ceu units car carrier at Shanghai Waigaoqiao, China with deliveries from mid of 2025. The ships are priced around $90mln each”.

Meanwhile, in the S&P market, Allied said that “last week has been rather dry in terms of SnP activity in the sector. There’s been only a handful of ships changing hands, reflecting the continuing weak performance of the sector. The few vessels were equally split between Panamaxes and Handysizes with their age averaging at 10 years old. Things might look brighter after the Chinese New Year holidays. In the tanker sector, things were significantly more active, with transactions taking place across the board of different size segments. The en-bloc sales continued strong last week too, especially in the chem product ships, with the remainder of the transactions mainly focused in the smaller vessels such as MRs and LR1s. This is a direct reflection of the ruckus around the product trade, due to the upcoming embargo on Russian clean products. The average age of the fleet changing hands was 13 years old”. 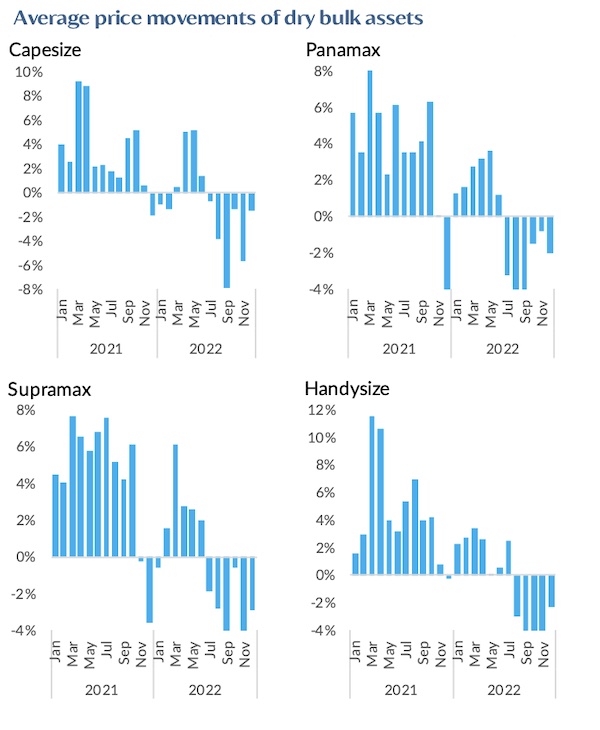 Banchero Costa also noted that “an active SAP market both for tanker and dry units with considerable requirements for dry bulkers, both young and vintage tonnage. We have noticed some softer offers being given for 15/20 years old units whilst for the younger ones prices are stable or only marginally decreasing compared to the underlining chartering market. In a private deal the IVS HIRONO 60.000dwt built 2015 Onomichi (eco engine, BWTS fitted) was rumoured sold at $24.5mln to Pac Basin who also announced the purchase of an enbloc of 6 Ultramax for a total $125mln. Deliveries are expected between February and July.

The tankers market remained very firm with several “asset playing” positions being fixed. The ULCC OCEANIA 442,470dwt built 2003 DSME is now committed at $50mln, the LR2 LEO 110,000 dwt built 2010 New Times was rumoured committed to Middle Easter Buyers around $42/43mln. The Aframax KRITI GALAXY 110,000dwt built 2006 Mitsui was rumored sold for a price in region of $38mln. Ice class tonnage was still receiving firm premiums for prompt availability, although we noticed some buyers withdrew considering the ice season may be off earlier this year. A strong price was achieved by the CHEMTRANS MARS 37,000dwt built 2007 HMD (ice class 1A) sold to undisclosed for $20.1mln”, the shipbroker concluded.
Nikos Roussanoglou, Hellenic Shipping News Worldwide