2022 to date has seen a total of 292 Container sales, with the majority of these transactions taking place in the in the first half of the year. In October there were just nine Container sales reported, compared to 47 in January, a decrease of 81%.

Values for modern Container vessels have fallen across all sub sectors. The VV value for a five year old New Panamax vessel is currently at USD 107.25 mil, even though this is a fall of 39.5% from the start of the year, prices are still at incredibly high levels. 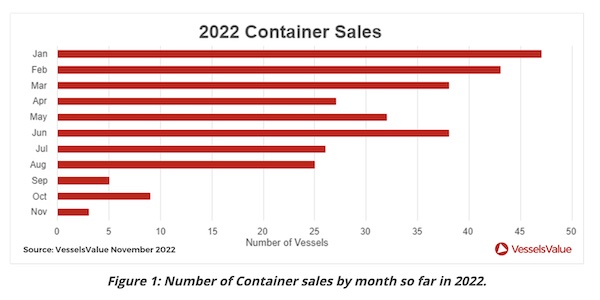 Values have fallen as earnings have taken a downwards trajectory following the record highs earlier this year. One year Timecharter (TC) rates for Post Panamax Containers are currently at 69,000 USD/Day. Although still far above historic averages, this is a fall of 54% from the record high of 148,500 USD/Day from March to August of this year. Economic fears and a fall in demand globally have continued to put pressure on rates. 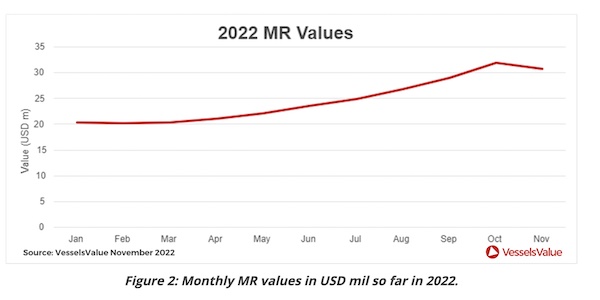 Despite this small drop, MR values remain at historically high levels and out of all the Tanker subsectors, older MR tonnage has seen the biggest increase this year with values for 20 year old 45,000 DWT vessels worth nearly double today, up from USD 6.6 mil in January to USD 12.18 mil today.